MEET SOME OF OUR RECENT HOMEOWNERS 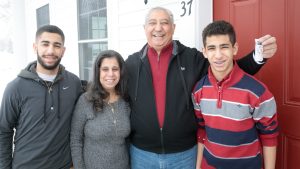 “I came from my original country (Egypt) in June 2012 with my two sons who were 12 years old, and 8 years old. My husband was still in Egypt.

I found myself alone in a new country, new culture, and different language; moreover, I was responsible for 2 boys. I had to work hard to continue my residence paperwork to send legal paperwork to my husband in Egypt in order to enable him to come to the United States. It was not easy for me to satisfy kids who felt away from their dad, their country and their friends.

We started living in a small apartment with one bedroom. A new dream started to appear in our life—to have a home of our own. Of course, it must be bigger than the one-bedroom apartment where we lived. In 2014, my husband joined us, and I thanked God that we became again a complete family.

To follow our dreams, we started looking for a home. An employee at our local town hall told us that there was a sign nearby showing that Habitat for Humanity MetroWest/Greater Worcester builds affordable houses. This was my first time hearing about Habitat for Humanity. We applied, and in December 2016 we won the lottery. We moved into our new house in March 2019!” - Cherine Mikhail

And Mrs. Mikhail has since let us know that she has become an American citizen. 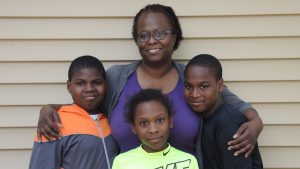 Maggie, a single Mom with three boys, is the very embodiment of selflessness and compassion even in the face of her own housing crisis. Maggie and her boys were scheduled to move into their forever home in Holliston in November 2017.  When Maggie heard that Mona, a single Mom with two boys who would be her neighbor (but had to wait several months until the next Habitat home was built) was homeless, Maggie volunteered to give up her home so Mona and her family could have a safe place to live. Learn more about Mona and her family below.

With your support, and the hard work of hundreds of volunteers, Maggie’s home—for which she waited an extra ten long months—was completed and dedicated in September of 2018. Maggie could finally say, “Home Sweet Home” for good. With so many unhappy headlines in the news these days, we find Maggie’s sacrifice nothing short of inspiring and courageous.

In Maggie’s own simple words:  "Having a home gives you a confidence boost, freedom, and strength. The home is a cozy place to live and enjoy the things we like, whether it’s a garden with flowers, or healthy herbs. Our family can make it the way we want.” 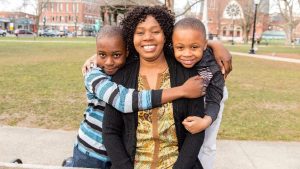 Before becoming a Habitat for Humanity MetroWest/Greater Worcester partner family—Mona and her two sons faced homelessness. Before moving into her forever home Mona, who works as a certified nursing assistant, told us she couldn’t wait to have her own home so that she could cook all of her favorite foods and watch movies. She was also excited to be able to invite her family to come visit. Her eldest son Loressen, loves video games and being outside.  He was so happy they would have a large yard to play in at their new home. Jason, her youngest son, was excited to ride his bike in his new neighborhood and eat pizza at their very own kitchen table!  Mona’s home was dedicated on November 18, 2017. 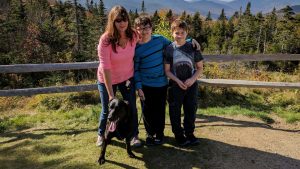 “We were chosen for a house that was being rehabbed and given a second chance, just like me and my boys were rebuilding our lives. The Habitat home and my family were made for each other. Watching my boys play in our yard with our dog is such an incredible feeling. They can walk to the library and ride their bikes to the park with friends. It gives us a feeling of being normal and calm. The best feeling happened just last weekend when we were hiking. My son came up and hugged me and told me he was proud of me. He told me he loved me and how happy he was that I could keep my promise I made to them of having a home.” - Coreen

“When I moved here seven years ago from Uganda, life had been rough. I was pregnant, and it was difficult to cope in a new country. My brother helped me get on my two feet, and once I gave birth, we moved into public housing. I started to work part-time, and with the help of my brother, who was not only the breadwinner, but a college student, we were able to survive.

A friend talked to me about pursuing home ownership. I was only a part-time worker and couldn’t afford a home, but she mentioned Habitat for Humanity, which lit a fire in me.

I never gave up since that time! I got a full-time job, then I applied. When I saw Habitat staff at my door with lots of balloons, I was filled with joy. I had been accepted! Habitat for Humanity has changed my life forever. It was always my dream to find a peaceful home for my daughters, and now it is a dream come true! Seeing my girls running around the house every morning makes me feel great joy.

I always made a promise to my daughters to live a better life, and I will do anything to achieve those goals. I will always give the love and support they need to continue their education and to live in a peaceful home. I also have a dream of pursuing higher education! Moving into our home gave us a sense of peacefulness, strength and belonging. The house is a perfect place.” - Jackline

Home Sweet Home. Read about Gina journey to homeownership and her hopes for the future. Her home was dedicated in Worcester, June 2017 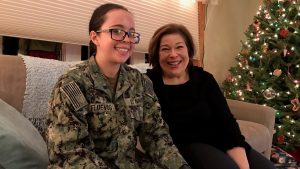 Gina was renting an apartment in a 100-year-old triple-decker with a leaking roof and a faulty heating system. The bills were so high that hot water could not be used for washing hands or dishes. The mildew in the hallway made it hard to breathe and the rugs were always damp. Can you imagine sheltering for 14 weeks in such a place? Thankfully, Gina doesn’t have to. Gina and her daughter moved into a Habitat home in 2017. And though this does not make her immune to the impacts of the 2020 pandemic, it has allowed her to stay safe.

"My dreams for the future, my hope for the future: never have to move again! Everyone wants only the best for their children, and I am no different. I want to see my daughter happy. She smiles most of the time now. It’s been a long time since I’ve seen those teeth. I’m sure the braces didn’t help either. Those of you who have teens know you never see your kids come out of their bedrooms unless they want something. Tara actually hangs out in the living room. It’s really a small miracle.

My hope is to have holidays. I want to have people come over for dinner, and I like to plan menus and parties and shop for food and run around like a nut just to get ready for entertaining. It may seem like a little thing but I want to argue with my family about who gets what holiday–just like you.

I want my daughter to invite her friends over. In our last place I would tell her to invite a friend over and she would always say no. She didn’t want anyone to see the old place. I’ve been introduced to at least 4 friends just in the last three months. Now if I could only get them to stay awhile and eat something!

I want to see my neighborhood turn into a mini Habitat for Humanity city. I can walk to my new neighbors Lindsay and Steve’s house and hopefully in the near future be able to walk to new home locations and volunteer to build. I will see my daughter graduate from high school this year, and later college from this house. I will be able to see her wave when she comes home for the weekend/vacations or moves out. With that said, I want to see the neighborhood kids grow up and move out as well.

I want to see my granddaughter feel comfortable in her new bed. I want her to feel special. She has her own closet and bureau and will say let’s go home when we are out and about. I want her to feel safe and secure and I want her to know this is her house, as well as ours. She loves to find a recipe, and then we bake. The kitchen is the heart of the home. Home is where Tara and Kairi are.

My home is beautiful but what is more beautiful is all those people that give up endless time and talent to put me in this house. Thank you to all of the staff, volunteers and partners for building us a decent home to live in, dream, grow and prosper!" - Gina 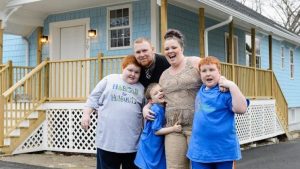 The Ewings family lived on a busy street in a first-floor apartment for five years with their three boys who have autism, dreaming of owning their own home one day.  When they got a call from us, that dream finally came true, and the family is now living in an energy efficient remodeled home in Worcester. The Ewings home achieves nearly zero net energy consumption, and it is our first deep energy retrofit with LEED certification. This helps the Ewings family to be able to save on the high cost of energy.

Marc Ewings shared some of his family’s journey

“Children who have autism, they bolt, and the apartment we lived in previously was on a very busy road. We worried because of the location. It was also cramped, and it was expensive. Then, Sophie applied for a Habitat home with encouragement from a former co-worker who is a volunteer with the organization.

We were notified that we were selected and were “in the running” for a home. We were excited, but a month later, we received a letter saying we were not selected.  My wife took it hard, I told her, ‘Don’t worry, honey. We’ll save and have a house someday.’

A month later, we received a call from Habitat asking us to come in for a meeting. They asked if we were still interested in a home from Habitat. The family they originally selected opted out and did not want a home at that time. We jumped out of our skin. We were so excited.

Literally my kids call it a mansion. We have two floors. There is a therapy room for the boys downstairs, two bathrooms, a washroom, a living area and dining room. It is a beautiful home, and everything is brand new, and it is pretty cool that it tells me how much I am spending on electricity or gas.” – Marc

Sophie Ewings shared her thoughts on living in her own home

“Habitat For Humanity changed our quality of life. Every single donation, every single person who made our dream a reality is an angel. My husband served Honorably in the Marine Corps, and what we have gotten in return for his service has been life changing. We are forever grateful. Strangers became saviors. There are no words to express our Thanks. Hopefully the smile on our boys' faces tells you, even if they don't have the words. All of our Best to all of you Angels. Be well, friend." –  Sophie